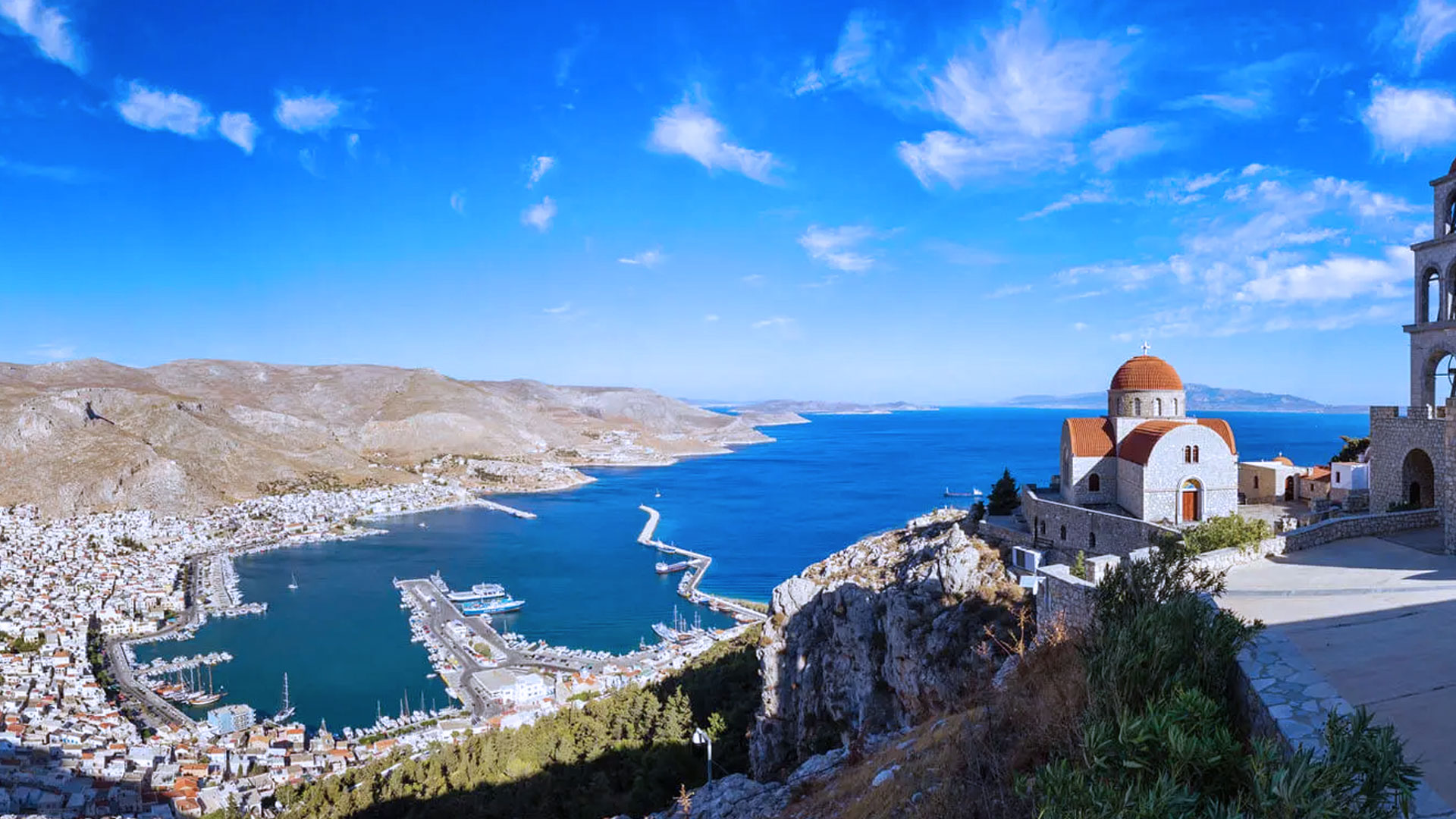 This is Kalymnos: a destination offering more than you can imagine!

Welcome to Kalymnos, the island of the sea-sponge harvesters! The fourth largest island of the Dodecanese Group is widely known as an international sponge-harvesting trade center. After WW II, Kalymnos remained the only Greek island engaged in the sea sponge-harvesting activity, supplying domestic as well as foreign markets. Thanks to its unique geomorphology, Kalymnos is a tourist destination known worldwide for offering alternative vacations and activities such as climbing, scuba diving, mountain hiking and spelunking, a true paradise for passionate action-lovers!

Did you know that the island has its own fjord?! The port of Rina is a beautiful protected bay which actually reminds us of a small Norwegian fjord!

The capital of Kalymnos is the port-town of Pothia, a colourful island settlement spreading amphitheatrically over the foot and slopes of two hills and the valley between them. Pothia boasts remarkable architectural features; in its narrow streets, stand next to one another impressive old mansions (among them stands out the Vouvalis Mansion, the house of a prominent sea sponge merchant and benefactor of the island), elegant captain houses and modest one-storey sponge-harvesters’ houses. Each neighborhood has its own church but the most impressive ones are considered to be those of 1861 Sotiras Christos (Christ Saviour), with a silver dome and a marble iconostasis (icon screen) crafted by the eminent Greek sculptor Giannoulis Chalepas and Agios Nikolaos church. Outstanding buildings such as the Town Hall and the Prefecture Hall boasting a beautiful italianate architecture reveal the long presence of Italian conquerors on the island.

Peer into the island’s history through a visit to the Archaeological Museum, whose major artefact is the copper statue known as the “Lady of Kalymnos”; the Maritime Museum, dedicated to the life and customs of the sponge harvesters and “Kalymniko Spiti” [the House of Kalymnos], a small folk art museum illustrating everyday life on the island at the end of the 19th and at the beginning of the 20th century. A visit to the castle of Chrysocheria, built in the 15th century by the Knights Hospitaller, is essential; on its foot lies the trademark of the island: three stone-built windmills! When your stroll through the narrow lilliputian streets of Pothia comes to an end and after having enjoyed the panoramic breathtaking view from Agios Savvas church, head to the promenade, pick one of its cute waterfront tavernas and taste delicious local specialties, such as “spinialo”, the sponge-harvesters’ titbit consisting of ray, sea urchins and sea-figs preserved in sea water or “mouri”, stuffed lamb or goat cooked on a metallic baking pan (named gastra).

Around Pothia you will find beautiful picturesque hamlets that worth discovering, such as Panormos, Chorio, Skalia und Myrties. One of the island’s highlights is Vathys, a brushstroke of lush vegetation within an infertile rocky terrain lying in a fertile valley of citrus fruit groves, 11km from Pothia.

Did you know that the island has its own fjord?! The port of Rina is a beautiful protected bay which actually reminds us of a small Norwegian fjord!

Are we ready to dive?

It’s said that Kalymnos owes its name to the “beauty of the waters that lap against its beaches”; taking this into consideration, it is only natural that on the island you will come across dreamy beaches, ideal for unforgettable fun dives! One of the most popular beaches is the sandy beach of Masouri, 9km west of Pothia. Therma is the closest beach to Pothia, only 2km away, while Vlychadia (5 km away from Pothia) consists actually of two beaches, a sandy and a pebbly one. Linaria is a family beach, while younger people opt for the cosmopolitan Kantouni beach. Platys Gialos is renowned for its black sand and is suitable for fishing. Emporeios is a favourite among wind and kite surfing lovers. If you want to escape the crowds choose the Bay of Arginontes or the beaches Almyres, Drasonta, Pezonta, Palionisos, Sikati and Petronta, which are accessible only by boat.

Get an adrenalin rush!

A steep, impressive rocky landscape, once perceived as a curse by the inhabitants, has been proved to be a true blessing for climbing lovers. The whole island is a unique natural climbing field with more than 1300 climbing tracks of various levels of difficulty providing a huge range of climbing on slabs, big walls, overhangs and tufas to suit every level and style. The island’s suitability for rock climbing was discovered randomly in 1997 by Italian climbers, who actually established around 40 climbing tracks. The initiative was later supported by the local community and, as a result, the island today is considered to be one of the top climbing destinations worldwide. Due to the abundance of challenging rock formations, the potential for new routes is enormous; less than 10% has been explored, surrounded by some of the finest limestone crags in the world (the Grande Grotta cave forms a giant limestone amphitheater). Kalymnos also hosts the world-famous Climbing Festival, a non-competitive international meeting attracting top climbers from all over the world!

The island that boasts such a long tradition in sponge diving could not be less than the ultimate scuba diving paradise as well! The seabed of the island offers a unique diving experience, where beauty takes the form of forbidding underwater cape slopes, shipwrecks, underwater caves, and reefs of vibrant colour and thriving aquatic life. There are two diving centres and a Public School for Professional Divers on the island (info: Kalymnos Port Authority).

Diving lovers can further attend the “Diving Festival and Skandalopetra Games of Kalymnos”, which presents a full program of various activities on free, autonomous and organised diving; diving fans are brought together at an event that brings back to life traditional sponge diving techniques. The festival offers a fascinating range of activities, for which no participation fees are required: skandalopetra Games, CMAS Apnoea International Judge Course, introduction to CMAS apnoea disciplines, demonstration of traditional sponge diving techniques, visit to Diving Museums, underwater Photography Seminar and Underwater Photography Contest.

Discover the natural beauties of the island through hiking! Follow wonderful scenic routes such as this from Chorio to Kastro of Chrysocheria [Castle of Chrysocheria] (20’-min. hike) or further uphill to the top of Profitis Ilias (total trail length: 5 km). Another hiking route goes from Kalymnos (Pothia) to Vathy (total trail length: 4.5 km) along the old, Italian cobblestone path. On the island there have been also recorded more than 50 caves, linked to fascinating myths and traditions. Indicatively you can visit the Cave of Epta Parthenes (Seven Virgins), the cave of Kephalas with the rich stalactite formations (reachable only by boat from Pothia or Myrties) or Daskaleio (reachable only by boat from the port of Rina).

Don’t forget to visit the nearby islands Telendos and Pserimos, two tiny islands of unparalleled beauty, ideal for carefree, serene holidays. On Telendos make sure you visit Ai Giorgis chapel, where you will enjoy a lovely sunset view; also the early-Christian necropolis and the castle of Agios Konstantinos. Go for a swim in Chochlakas, Plaka, Potha, and Paradise; scuba diving fans are welcome to explore the ancient town sunk between Kalymnos and Telendos, while others may opt for hiking, climbing, or spear fishing. Pserimos offers the opportunity for a truly quiet vacation. All of Pserimos’ beaches are good for swimming while the beach in Vathys cove is the best by far.

There is a flight service to Athens and a frequent ferry service to Piraeus, Rhodes and to other Dodecanese islands. There are also ferry routes running to Cyclades islands, Samos and, during the summer season, to Chios, Mytilini, and Thessaloniki as well.

about the island activities informational

Comfort family full sea view Double/twin sea view room Double room with sea view veranda Double side sea view Family side view Junior suite with terrace facing the sea Superior double side sea view Triple room side just windows
The hotel is literally situated on the waves, and the enchanting view of the picturesque island of Telendos opposite gives you a feeling you are sailing.

Relaxation
Each room has a different décor and layout, though all rooms combine discrete luxury with timeless elegance. Minimalist furniture and fine fabrics enhance the rooms’ design to allow the guest to relax visually.

Luxury and elegance
Classic and contemporary, past and present, everything is in balance creating an atmosphere of discrete luxury that will take you on a journey through time.

Care and attention to detail
We use cookies on our website to give you the most relevant experience by remembering your preferences and repeat visits. By clicking “Accept All”, you consent to the use of ALL the cookies. However, you may visit "Cookie Settings" to provide a controlled consent.
Cookie SettingsAccept All
Manage consent

Performance cookies are used to understand and analyze the key performance indexes of the website which helps in delivering a better user experience for the visitors.

Analytical cookies are used to understand how visitors interact with the website. These cookies help provide information on metrics the number of visitors, bounce rate, traffic source, etc.

Advertisement cookies are used to provide visitors with relevant ads and marketing campaigns. These cookies track visitors across websites and collect information to provide customized ads.

Other uncategorized cookies are those that are being analyzed and have not been classified into a category as yet.