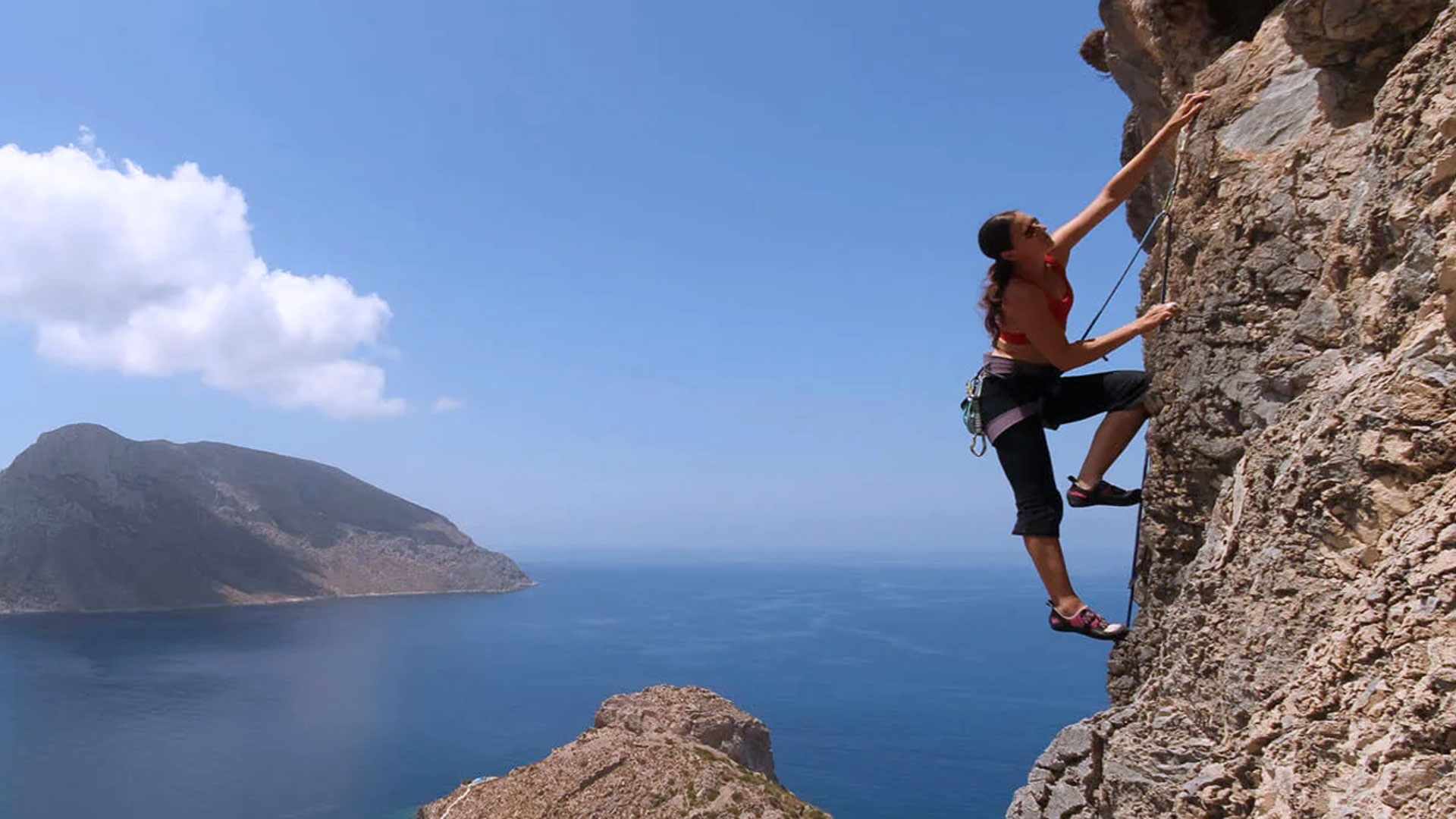 Climb to Seventh Heaven in Kalymnos!

Kalymnos, a small island located in southeastern Dodecanese archipelago, offers rock climbing and bouldering during the whole year. Especially in September, you can enjoy pleasant climbing temperatures in combination with warm water for swimming.

Climbers began drifting to Kalymnos in the mid-1990s as word spread of giant cliffs and seaside ambience. In a matter of a few years, the island became a climber’s paradise. Nowadays, there are approximately 200 walking distances in 77 climbing fields, including distinctive markings for the starting point of every trekking spot.

Kalymnos is one of the most important climbing destinations worldwide, an island that has everything a traveling climber looks for: abundance of challenging rock formations but also simplicity and authenticity. Here, the potential for new routes and new areas is enormous; less than 10% is explored, even though on Kalymnos the rock climbing experience can last for a month: surrounded by some of the finest limestone crags in the world (the Grande Grotta cave forms a giant limestone amphitheater), the island provides a huge range of climbing on slabs, big walls, overhangs, and tufas to suit every level and style.

Despite its popularity with visiting climbers, Kalymnos still remains an untouched and tranquil place. Its small towns and villages scattered along the island’s coast, the endless sunshine and the limitless climbing potential of the island convinced some climbers to settle here after their first visit, in order to offer guiding services or even work in small stores.

Those who are less inclined to spend their holiday hanging from a cliff shouldn’t miss the opportunity to enrich their island experiences: with several mountain trekking distances, they can explore walking trails used by locals in the past, enjoy mountain bike riding, or even go for a simple ride along the coastal route admiring the sea view.

Kalymnos also hosts world-famous festivals, such as the Climbing Festival, a non-competitive international meeting of athletes, which takes place every 2 years.

Diving lovers can further attend the Diving Festival of Kalymnos which presents a full programme of various activities on free, autonomous and organized diving; they can also see the exhibits on the island’s diving history and sea life featured in the Naval Museum as well as the Archaeological Museum.

Combine rock-climbing activities with a wandering through the remains of the ancient city of Hora; hit hiking trails and discover isolated monasteries located throughout the island, or satisfy your wanderlust with a sailing around neighbouring islands and small, inaccessible bays.

about the island activities informational

Comfort family full sea view Double/twin sea view room Double room with sea view veranda Double side sea view Family side view Junior suite with terrace facing the sea Superior double side sea view Triple room side just windows
The hotel is literally situated on the waves, and the enchanting view of the picturesque island of Telendos opposite gives you a feeling you are sailing.

Relaxation
Each room has a different décor and layout, though all rooms combine discrete luxury with timeless elegance. Minimalist furniture and fine fabrics enhance the rooms’ design to allow the guest to relax visually.

Luxury and elegance
Classic and contemporary, past and present, everything is in balance creating an atmosphere of discrete luxury that will take you on a journey through time.

Care and attention to detail
We use cookies on our website to give you the most relevant experience by remembering your preferences and repeat visits. By clicking “Accept All”, you consent to the use of ALL the cookies. However, you may visit "Cookie Settings" to provide a controlled consent.
Cookie SettingsAccept All
Manage consent

Performance cookies are used to understand and analyze the key performance indexes of the website which helps in delivering a better user experience for the visitors.

Analytical cookies are used to understand how visitors interact with the website. These cookies help provide information on metrics the number of visitors, bounce rate, traffic source, etc.

Advertisement cookies are used to provide visitors with relevant ads and marketing campaigns. These cookies track visitors across websites and collect information to provide customized ads.

Other uncategorized cookies are those that are being analyzed and have not been classified into a category as yet.